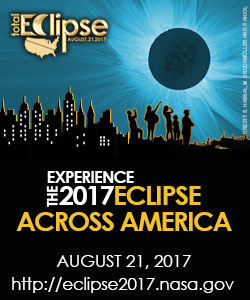 The Ida Grove Library has joined more than 1,000 libraries across the country to participate in the celestial event of the century, the August 21, 2017 Solar Eclipse. During this national event, the shadow of the moon will sweep across the United States in a narrow band from the Pacific Ocean to the Atlantic Ocean in a spectacle that hasn’t occurred in decades. In fact, the last total solar eclipse for the United States was nearly 40 years ago. The rest of the U.S. and North America will see a partial eclipse, with the Moon covering up only part of the Sun. It is aptly named the Great American Eclipse.

On Monday August 21st, the library will host an Eclipse viewing party from 11am-1pm. During the viewing party, the library will be distributing solar viewing glasses along with information on safe eclipse viewing. The Grout Museum will be in attendance during the viewing with a special hands-on “Outreach to Space” exhibit for all ages, and there will be a live stream of the total eclipse from NASA.   NASA’s live stream will include a wealth of images captured before, during, and after the eclipse by 11 spacecraft, at least three NASA aircraft, more than 50 high-altitude balloons, and the astronauts aboard the International Space Station – each offering a unique vantage point for the celestial event.

Ida Grove Library is located at 100 East 2nd Street.  All of the scheduled eclipse programs are free and open to the public during library hours. Solar viewing glasses will be available free of charge as well during the eclipse viewing event.

Ida Grove Library has joined the STAR Library Education Network (STAR_Net) and its [email protected] My Library initiative, which is providing resources and STEM activities to libraries across the nation related to the eclipse. Partners include NASA, the American Library Association, and many other organizations. This project was made possible through support from the NASA Science Mission Directorate, Gordon and Betty Moore Foundation, Google, and the National Science Foundation.

Scroll to top
Near me
40 miles